My passion for the arts began at an early age, while watching my father Robert Sumner paint & draw. After high school, I went on to study at Brooks Institute of Photography in Santa Barbara, California, where I received a Bachelor of Arts degree in Commercial Photography. Succeeding my degree in 2008, I moved overseas where I spent almost 2 years living and traveling in Australia and New Zealand. In 2010, I moved to South East Asia, where I spent the next 5 years traveling between Vietnam, Cambodia & Thailand. It was there I practiced the art of photography, while teaching English to children in Northern Vietnam. In 2015 I co-organized the "Orphans of the Temple" event in Hanoi where I traveled to the countryside to photograph over 30 orphans living in an ancient temple being raised by a Buddhist monk. I photographed these charismatic individuals, and held an exhibit in Hanoi where 100% of the proceeds went to the orphans.

After returning home, I volunteered with the NBOP on a photo series aimed at raising awareness on voter engagement & bringing attention to the housing crisis surrounding Sonoma County & its residents. And in June 2016, I taught photography to kids of all ages at Parkside school in Sebastopol through Art at the Heart Academy, which was one of my most rewarding ventures yet. ​​

​Today I continue to practice the art form I love, and take great pleasure in sharing my photographs with the world. 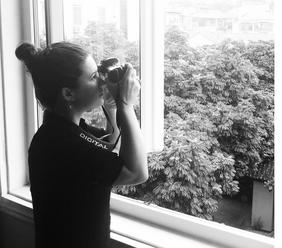